Babette is Lumière's girlfriend and a supporting character in Beauty and the Beast. She is one of the castle's maids who was turned into a feather duster during the Enchantress' spell, alongside the other maids.

In the stage musical adaptation, she is called Babette and is depicted as slowly turning into a feather duster rather than completely changing into one the night the spell was cast, so she keeps her human-size over the storyline. She is introduced when Maurice comes into the Beast's Castle. In an attempt to make Lumière jealous, she flirts with Belle's father and gives him a blanket, stating loudly that she "just love[s] old men". She has an argument with her lover where they point each others' past lovers (Babette's are named Pierre and Jacques). The mention of one, in particular, Veronique, causes Lumière to literally light up.

When Belle comes searching for her father, Babette tells Mrs. Potts about the news of a girl in the castle. She feels snubbed when Chip states that the newcomer is beautiful. Later on, after the Beast unsuccessfully tries to "convince" Belle to dine with him, (leading to him losing his temper), Babette flirts with Lumière and is horrified when he sneezes at her hands, which have been newly turned into feathers. She is afraid that he doesn't love her anymore, but the candelabra comforts her and chases her off after she says her famous quote, "I've been burnt by you before!"

She joins the other Enchanted Objects into singing Be Our Guest and even dances tango with Lumière. In Act II, she sings about her hopes of being turned back into a full woman in Human Again along with other Enchanted Objects. When the villagers invade the Castle, she distracts one of them by flirting while Lumière burns his behind. When Belle finally confess her love for the Beast and the spell is broken, Babette turns back into her former voluptuous self and has a banter with Lumière over him lying to her about liking her better as a feather duster. The maid admits she likes her lover better now as well, and he chases her off. In her final appearance (excluding the Curtain Call), Babette sings a triumphant reprise of Beauty and the Beast as she watches Belle and the Prince dance in the ballroom. 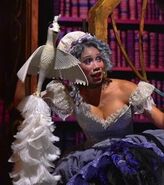 Add a photo to this gallery
Retrieved from "https://disneymusical.fandom.com/wiki/Babette?oldid=11317"
Community content is available under CC-BY-SA unless otherwise noted.